“Men make history and not the other way around. In periods where there is no leadership, society stands still. Progress occurs when courageous, skillful leaders seize the opportunity to change things for the better.“

For the first time after 6 months of joint project work, we seemed to become a highly functional team. We delivered a quality product on time, we solved real problems we had previously discussed so brutally that even some “outsiders” thought we were all in the Game of Thrones. We encouraged each other to take responsibility and without pardon, we shared our personal views and thoughts. We have motivated each other, and we have never taken for the wrong mistakes and disadvantages of other team members. This was just common sense to us. 🙂

Recently the universe had sent to me a book The Five Dysfunctions of a Team by Patrick Lencioni. In a fun and easy-to-read way this book describes what can cause a high-quality team to fail in their own way and how to deal with it. It was interesting for me to see how these insights map to the behaviors of my own team.

Let’s look at what Patrick says dysfunctions are.­­ 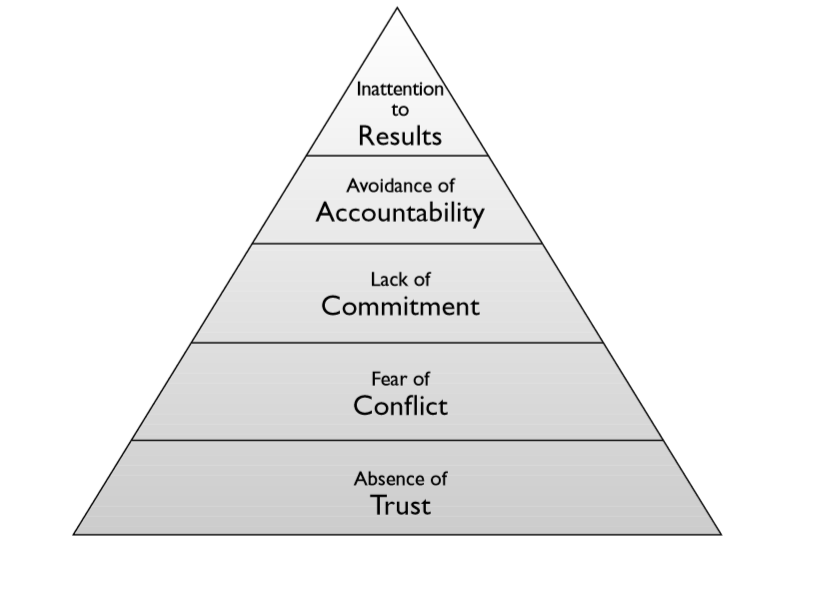 Absence of Trust is the first and fundamental dysfunction and manifests itself as an inability (or better said hesitance or fear) to express the weaknesses and faults, either personal or those of other team members. As such, this dysfunction sets the stage for Fear of Conflict. In other words, where there is no trust, there is a fear of conflict and this manifests as inability to engage in passionate discussions, share personal opinions and confront how we do our work. Where there is no passion in sharing opinions and beliefs, there will be hardly any incentive for the commitment to fulfill the vision that you don’t share, hence the Lack of Commitment. Due to lack of commitment, team members develop Avoidance of Accountability. Naturally, nobody feels accountable for something he didn’t commit to. This sets low standards. With nobody feeling accountable, nobody is focusing on results. We call this final dysfunction the Inattention to Results.

The aforementioned dysfunctions may be mistakenly seen as separate entities. In reality they are entangled and loss of focus on only one of them can bring the whole pyramid down and potentially have deadly effects on the team’s success.

Recognizing dysfunction in the team is a tough task, and the identification of painful points does not mean anything if you fail to set them right. Fortunately, there are techniques that can facilitate and accelerate the creation of an effective team.

Everyone will agree that confidence is something that is built for years. How then to overcome the lack of trust? Short and focused exercises cannot replace years, but they can help build confidence faster. One of them is Personal Histories Exercise where each team member answers a few short questions about himself. Questions must not be sensitive in nature, but very simple, i.e. where they come from, whether they have family, unique challenges from childhood and hobbies. Surprisingly, some team members know so little about each other. Exercise intends to increase the level of empathy and understanding. We tried this exercise in our own team and the results were incredible. We shared private moments, both beautiful and bad, cheered each other in the moments of life and business challenges, made sweet cakes for each other, cried on the phone in the late hours… and it was not because production app was down.  No wonder Absence of Trust is a dysfunction that sabotages us.

The second, more complex exercise which we had a chance to try out was Team Effectiveness Exercise. Exercise requires that each team member for all other members expresses their highest quality and considers their greatest disadvantage. After we did this exercise in our team, all team members were surprised with how others perceived them. Each team member had at least one negative trait that he didn’t notice and at least one positive that he was really pleased others can see. Exercise ultimately provoked positive effects and during the following period of time all team members were trying to work out their own shortcomings and were even more committed to what they were already good at. Interestingly, when someone noticed the moment in which the disadvantage was corrected, he praised that member for the energy that he invested in and motivated him to continue in that direction. We were exactly what we wanted others to be for us – we were the change we wanted to see.

4 ways to become a leader without anyone’s permission